On March 27, the first edition of "Teammates," an interactive battle show will air live on Twitch.

Well-known creator Amar has brought in a real Twitch heavyweight for his latest show - none other than Pokémon messiah and former most successful streamer in the world Trymacs will be hosting a challenge format together with Amar, which is probably meant to be reminiscent of the popular Pro7 shows "Joko und Klaas - Das Duell um die Welt" and "Schlag den Raab". And the best news for viewers is that the new project is already planned for a longer period of time and is to take place on a regular basis. 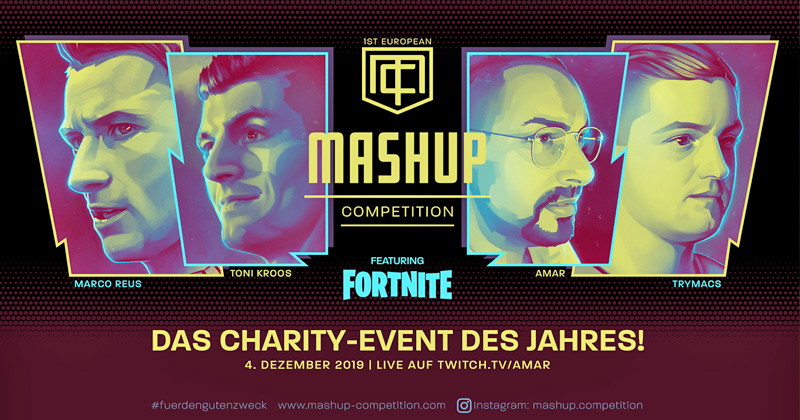 According to Trymacs, they have already been working diligently on the implementation before and during the lockdown and have set various levers in motion to be able to offer fans a perfectly organized and elaborately designed show. Thus, the two mention in the announcement video that the planning and implementation has been running at full speed for more than half a year. The two are probably not leaving anything to chance and explicitly point out that this is not "just any 0815 show", but is to be something that has not yet existed on Twitch and YouTube.

The production company that was responsible for the big "Mashup Competition" two years ago is supposed to be behind the whole thing. This was a charity tournament in which prominent faces (Toni Kroos, Marco Reus, Julian Brandt, Timo Werner and many more) competed against each other in the battle royale shooter Fortnite. At the time, over EUR 300,000 was raised for a good cause.

The principle of "Teammates" is that Trymacs and Amar always compete as a team against another team of two. The opponents are also supposed to be well-known personalities, but the guys have not revealed them yet. The battle will be played out in various video games, but also in certain sports challenges. There will also be quiz battles and tasks where skill is required. A total of 20 different battles will be played, but exactly which games and disciplines are involved has also not yet been said, because the two opponents themselves have no idea what's in store for them. In short, it's going to be a big surprise - both for the spectators and for the participants.