Since the beginning of February, Iron Gate's sandbox game has been sweeping across the newly opened Twitch landscape, and just like in the game itself, there is no end in sight to the Viking simulation's triumphant march.

When the fog of night lifts, the morning dew illuminated by sunlight makes the vast, uninhabited meadows sparkle, the harsh sea roars on the horizon, inviting you to explore despite the threat of adversity, and you think with an axe in your hands, "this is wonderful, this is where I'm going to make a home for my tribe." - then it's already done for you, because then the magic of Valheim has enchanted you.

Because even if the game's visuals aren't exactly contemporary, it exudes a charm that inevitably reminds you of your first hours in Minecraft. "A world made of millions of cubes ... what's so special about that?" they thought to themselves, but what followed in the next few years didn't make video game history for nothing. Now the developers come from Sweden again and it's an Early Access title again. So the best omens for Valheim to become the new Minecraft for adults? Maybe even much more than that!

If you've been scrolling through Twitch over the past few days, you'll hardly have missed Valheim's inviting preview artwork. If the first places on the streaming site are usually always occupied by the same games in different orders, it naturally stands out when a supposedly new hype candidate sneaks in between CS:GO, League of Legends and GTA V. But it seems that Valheim has come to stay. Specifically, the game has actually sold over two million copies by now, and you can hardly find a streamer who isn't busy looting, building, or exploring new sections of Valheim's gigantic map. In the last 14 days, the survival hit has reached an incredible 15,000,000 watchhours on Twitch - more than World of Warcraft or Among Us! On average, just under 45,000 people watch the game on Twitch, while the viewership peak of 127,143 simultaneous viewers was reached on February 08.

The game throws us into a randomly generated, huge world to explore alone or with up to 10 friends. Within this open game world there are different biomes, i.e. areas with different geographical characteristics that have their own flora and fauna - including dark forests, dangerous swamps or snow-covered mountains. Besides, a huge sea can be discovered by boat, where dangerous monsters are up to mischief. In the individual areas, you'll repeatedly encounter powerful bosses that can hardly be conquered alone, or only with a lot of practice and good equipment.

The base can be freely and individually designed according to taste. The building materials needed for the construction do not come for free to the player, but must be mined with pickaxe or axe at the appropriate places. So it's up to you to decide how you want to play Valheim - as a leisurely farmer and architect who wants to build the perfect home, or as a daring adventurer for whom no challenge is too great.

Out of the daily grind, into adventure

The tiring Corona daily routine, the prevailing restrictions around the world, and the weather that is largely hostile to adventure may well be one reason for Valheim's success. Those who immerse themselves here quickly forget everything around them and can spend a few hours mindlessly exploring a completely strange and mysterious world and doing whatever they feel like.

Especially the fact that you don't have to compete against other players and that you don't always have to be on the road with the best gear, as in other survival games, certainly attracts many casual players. Valheim can be explored on your own or with up to 10 friends, although some of the later challenges were designed by the developer more for cooperative teamwork. The game combines the elements of different representatives of the genre in an amazing way - it offers the perfect sandbox like Minecraft, has a sophisticated crafting & resource system like Rust, and with its interestingly designed world that tells its story according to the "environmental storytelling" principle, can still function as a completely single-player experience like The Forest. 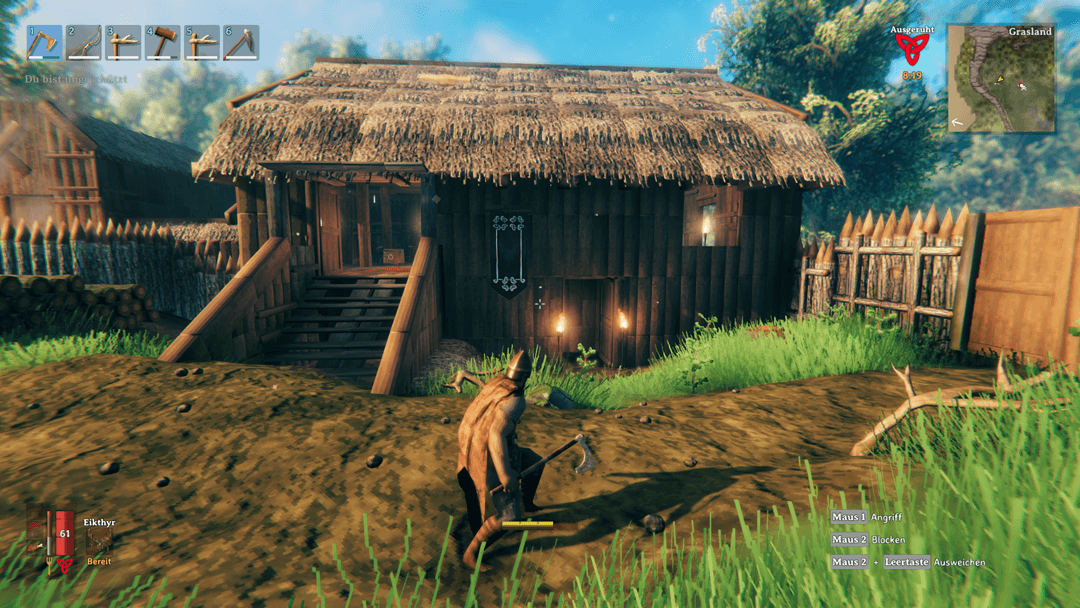