Are PlayStation 5 consoles going to be available in stores before the end of the year? Sony gives hope!

In a tweet, Sony has thanked all gamers for the biggest console launch of all time and announced that many retailers will receive Sony's highly sought-after console before the end of the year. Meanwhile the prices on eBay are skyrocketing!

By now, everyone has probably noticed how the PlayStation 5 pre-sale went - overloaded sites, frustrated fans, one shitstorm after another. Sony is truly not to be envied these days, as criticism is raining down on them from all sides. Firstly because of the questionable communication with the fans regarding the pre-order, secondly because of clearly defective consoles. The whole situation has become so ridiculous that PlayStation 5 consoles are sold on eBay for around 1000€. But Sony is now promising more consoles - not for the big online department stores, however, but for retailers who had almost no possibility to offer consoles directly in the store at the time of release.

Can Sony meet the demand for consoles by the end of the year?

Sony is talking about PS5 stocks. We can only guess at most what this means in concrete terms. These are probably not newly produced consoles, but rather remnants from Sony's own inventories. Therefore this tweet must be treated with caution. It can be assumed that some retailers will have a few consoles for sale, but these will also be completely sold out within a few hours.

If you want to get your hands on a console before the end of the year, you should contact your local store.

As already mentioned in the tweet, Sony advises to contact local retailers, i.e. electronics stores or gaming stores, to reserve a console. How the respective retailers handle the situation is probably left up to them. However, it should be obvious that the "first come, first served" approach applies here as well. So anyone who did not get a PlayStation 5 when it was released should quickly visit their trusted retailer.

Well, supply and demand - we all learned that early on. But if you want to get an idea of a real price explosion, just type "PlayStation 5" into the eBay search box. Disc versions of the latest next-gen console are sold there for almost 1000€. You can see how much this console is in demand and how many people could not buy a console the "normal way". This madness will probably end when Sony is able to offer the PlayStation 5 again all over the world. Until then, we recommend to keep an eye on the official social media channels of the manufacturer! 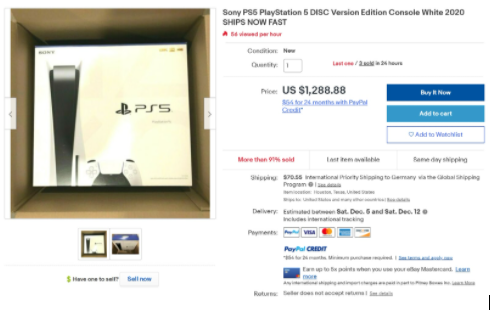