It is well known that Twitch isn't afraid of banning large streamers that generate millions of clicks for their platform. This time, the Swede Sebastian Forsen, better known under his pseudonym "forsen", has been hit - and, it seems, forever.

Perma-Banns are a daily occurrence at Twitch. Again and again there are streamers that go over the top and produce questionable content on the platform. In most cases, this is detected faster than the person concerned has the chance to be successful with it. Forsen is a different story - the Swede has 1.4 million followers and is one of the largest streamers in the world. So how can it be that such an experienced and well-known creator is banned forever from one moment to the next?

He reacted to memes, videos and photos and became victim of a troll

Reaction and real-life streams are becoming more and more popular on Twitch, but repeatedly rule violations occur due to unreviewed content. This is also the case with forsen, which apparently received a link to a GIF from a viewer and showed it. Disguised as an inconspicuous moving image, a picture appeared that clearly violated the Twitch guidelines. We would like to spare you the description of the exact content of the image at this point. What an honorless and dirty move from the viewer …

Is a permanent ban exaggerated in this case or did Twitch act in the right way? The Internet community is currently discussing this matter on Reddit and Twitter. Obviously forsen did not want to show the footage to his viewers, because immediately after the picture in question appeared, he closed the browser tab and commented the situation with the words "[...] that's why we can't have nice things". Of course, showing such content was not intentional, and yet, a short time later, the permanent ban was imposed. Forsen also confirmed on Twitter that he was banned because of the "horse pic". 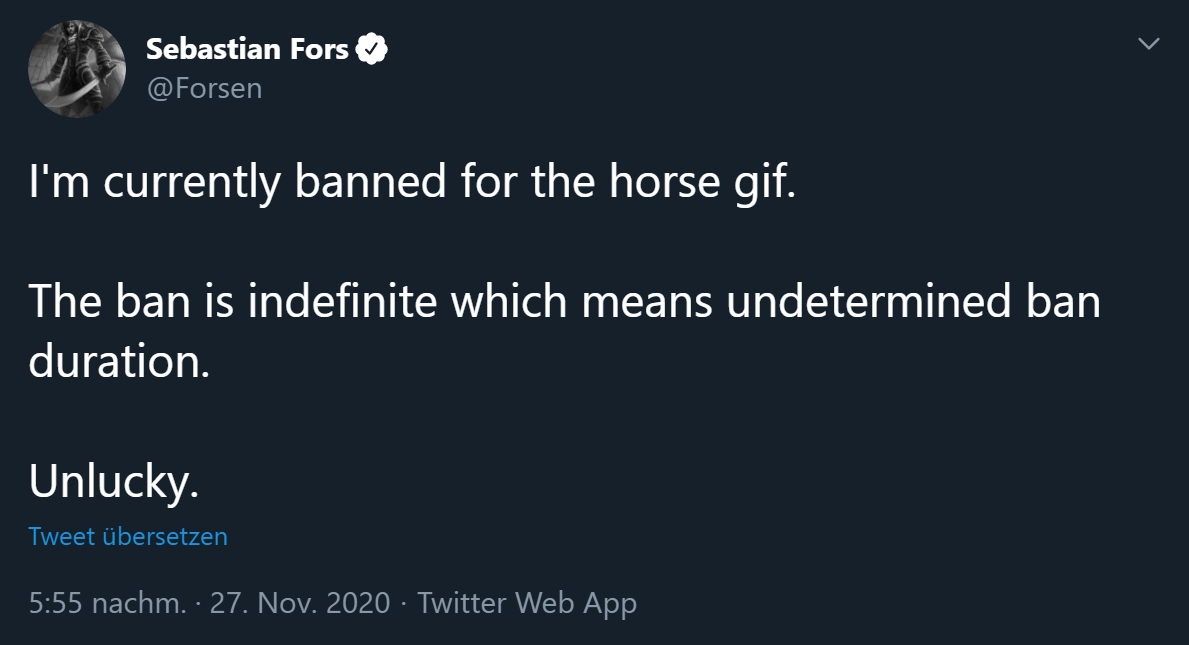 His fans are now going to the barricades and demand the immediate lifting of the ban. There would be much more controversial content on Twitch, for which no or much milder punishments are being imposed. Reaction streams are and remain a potential danger for streamers, because it happens again and again that well-disguised pictures or videos find their way into the streams of the very big ones. It remains to be seen whether Twitch will row back again and lift or soften the ban.