KEWK is an emote and term used to show in the chat that we are having a big laugh.

KEKW is an emote used in Twitch and is one of the most used emotes and terms in the streaming platform. The emote shows the face of the Spanish actor and comedian Juan Joya Borja, "El Risitas".

The KEKW emote is used when a situation seems funny to us and we are laughing.

The term KEKW was coined because in World of Warcraft, if a Horde player typed "LOL", for a laugh, an Alliance player would read in the KEK chat. The W at the end is the most used facial expression in Twitch - "W". 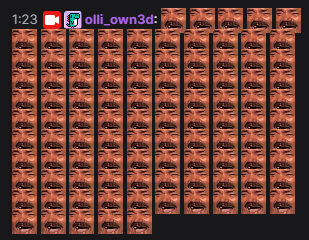 The origin of the KEKW emote is none other than an interview, back in 2007, where "El Risitas" is interviewed by Jesus Quintero in Canal Sur, during the show "Ratones Coloraos".

Frequently, Jesus Quintero interviewed Juan Joya Borja and his brother-in-law. Both had a contagious laugh that, even if you don't know any Spanish, you will start laughing too.

His laughter is his trademark and the emote came from a captured frame where "El Risitas" broke into laughter while telling a joke.

In August 2019, KEKW's emote became popular when viewers of xQc and the AdmiralBulldog streamers began using it a lot.

One of the videos of the “El Risitas” became a meme and is used, even today, with subtitles in different languages. It is used to show in an exaggerated way how companies, or people, are laughing at their audience with their products or bad decisions.

How is KEKW pronounced?

KEKW is really easy to pronounce as the term got just two parts: “Kik-u”.

Both the term, and KEKW's emote, come from Spanish actor and comedian Juan Joya Borja, "El Risitas" and is used when a situation is very funny and we are dying of laughter. It is the word that the Alliance read when the Horde used the expression "LOL" and its emote shows the laughter of El Risitas. It is one of the most used emotes and terms in Twitch.