The first day at the Horrorcamp was already full of highlights and scary events. Besides the spectacular arrival in the Ghostbusters Ectomobil, the record number of viewers was broken after only a few minutes.

The first day at the Horrorcamp was already full of highlights and scary events. Besides the spectacular arrival in the Ghostbusters Ectomobil, the record number of viewers was broken after only a few minutes. We reported: https://www.own3d.tv/en/news/events/twitch-record-broken

Pietro Lombardi visited the Horrorcamp and will stay until the end!

Knossi & Co welcomed two great guests on the very first day. Early in the evening, moderator Klaas Heufer-Umlauf rang the doorbell and had to undergo one or two tests of courage right after dinner. He was condemned to spend time in the so-called "Chamber of Secrets", which is located in the basement of the hotel. Then we headed together with unsympathischTV and Manny Marc to the second floor of the winding hotel, where obviously ghosts are doing their mischief. After some strange occurrences in the abandoned rooms, the moderator seemed quite frightened and was visibly happy when he was back in the illuminated living room.

A bit later, after Klaas had left the camp, the doorbell rang again. A person came in, wrapped from head to toe in a green spandex suit. The boys introduced this strange creature as "Slimer", the slime ghost from the Ghostbusters movies. After a short dance, Slimer revealed his true identity - it was Pietro Lombardi!

Pietro Lombardi immediately announced that he would stay until the end of the camp and was looking forward to a good time. His own sleeping coffin was already prepared, said Knossi to the well-known pop singer. 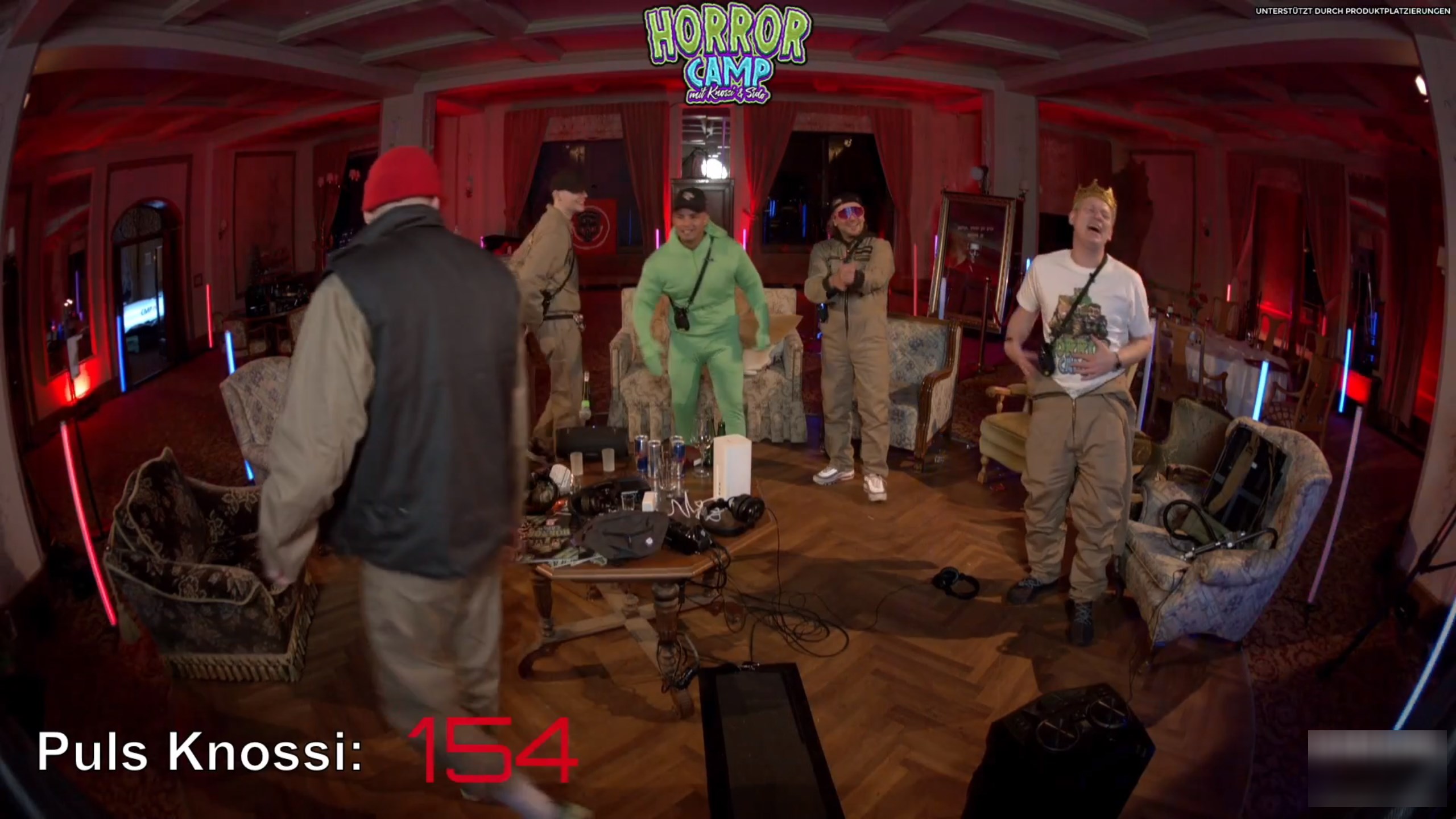 The first night at the Horrorcamp was drawing to a close and our ghost hunters dared to unpack the Ouija board at midnight. Ancient legends say that with this board you can make contact with ghosts and other supernatural entities. The group put their hands on the piece of wood and after one member of the group asked a question, everyone closed their eyes and the piece of wood moved as if by magic. 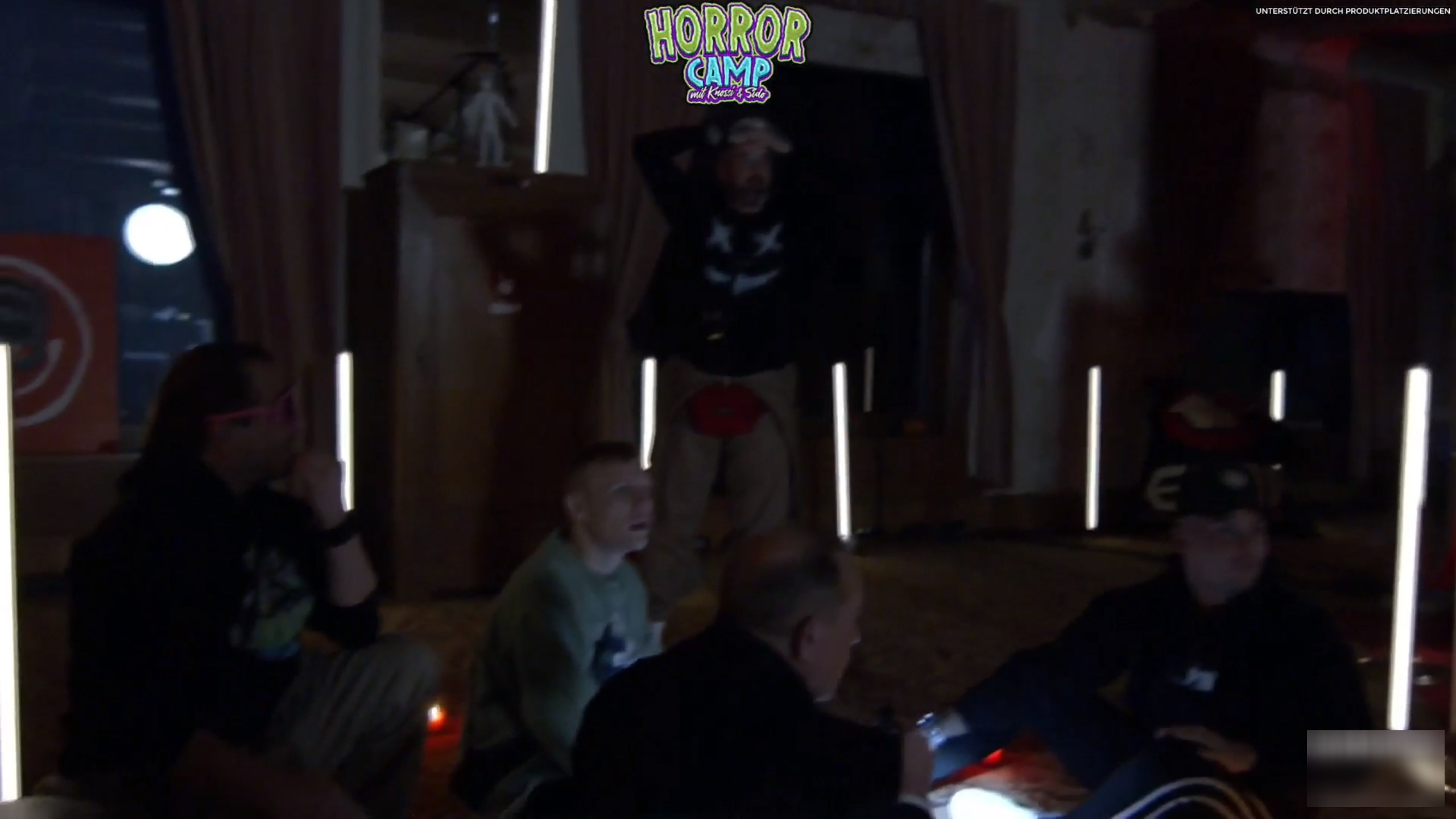 This was done on the floor of the abandoned hotel where the Horrorcamp is currently taking place. The wooden slider pointed to "T G", which caused a lot of speculation among the participants and in the chat. Especially scary is the fact that the camera flash, which was in the same room, suddenly started flashing several times. The participants assured themselves several times with the crew that no trick was played on them and in the end one could see the campers' sinking feeling in their stomach.

Last night at the bar the campers underwent a small test of courage at 4:00 am. One of them stood on a stool and without looking he had to fall backwards and was caught by the others. Rapper Sido was also caught without any problems, but when Knossi, unsympathischTV, Pietro and Manny Marc once again boisterously threw up the rapper and briefly became inattentive, they let him fall to the ground by accident. Apparently Sido suffered an injury, so that he had to go to the hospital this morning after persistent pain and swelling on his elbow. So far it is not quite clear how bad it is, because a medical diagnosis is still pending. We wish Sido a good recovery at this point and hope that he will be able to return to camp quickly and healthy. 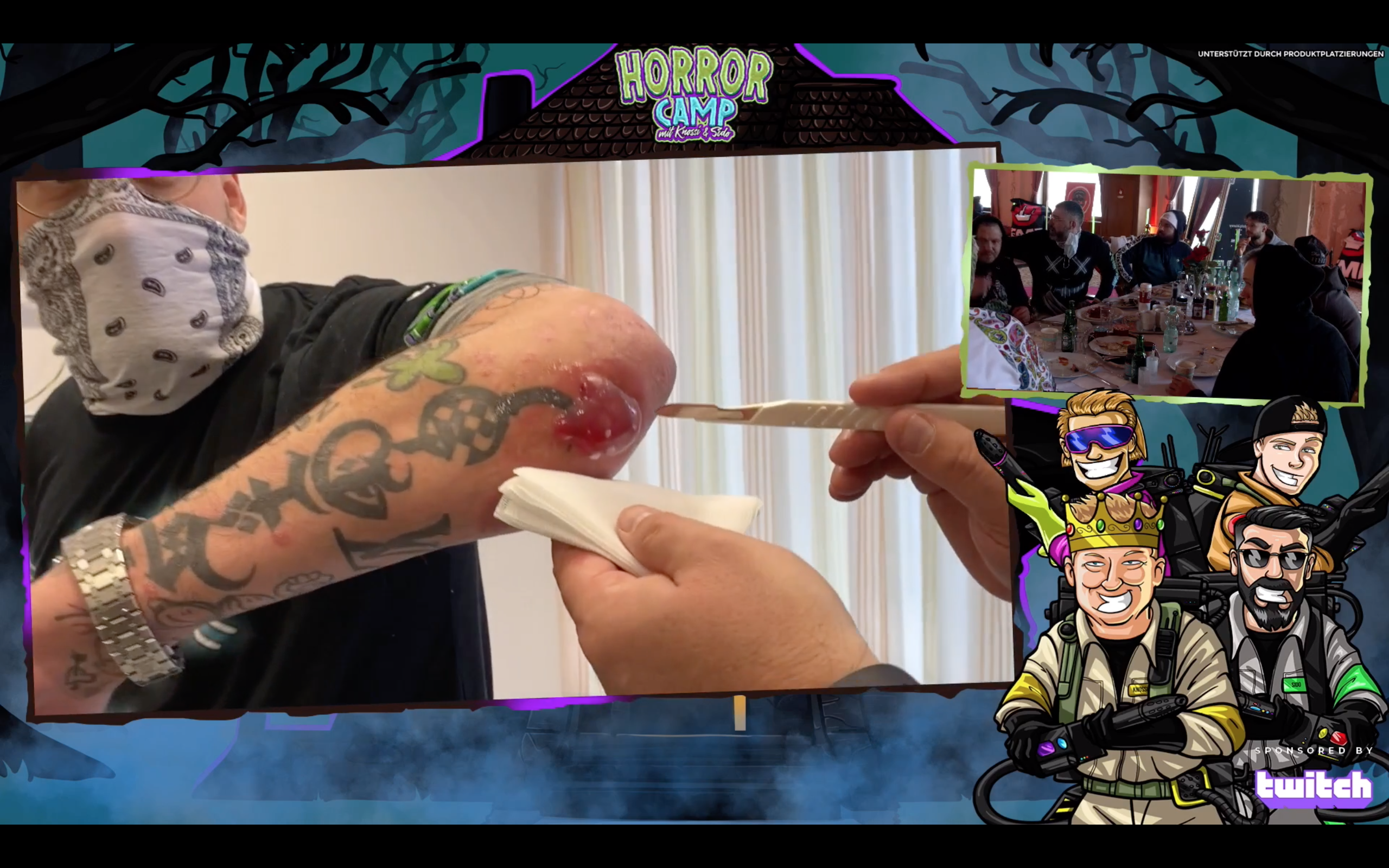 We are looking forward to a spooky second day at camp!