Tfue is the second streamer in the world who broke the 10 million follower mark on Twitch!

In August 2018, even before his move to Mixer, Tyler Blevins, better known as Ninja, proudly announced that he was the first streamer with 10 million followers on Twitch. With a statement on Twitter, he thanked his fans for their years of support and revealed that this milestone is the most important one of his career so far. Since then, no other streamer has managed to break that magical 10 million mark again, and Ninja has been perched lonely at the top of the most followed channels - until now!

Tfue joins Ninja in the short list of 10 million streamers 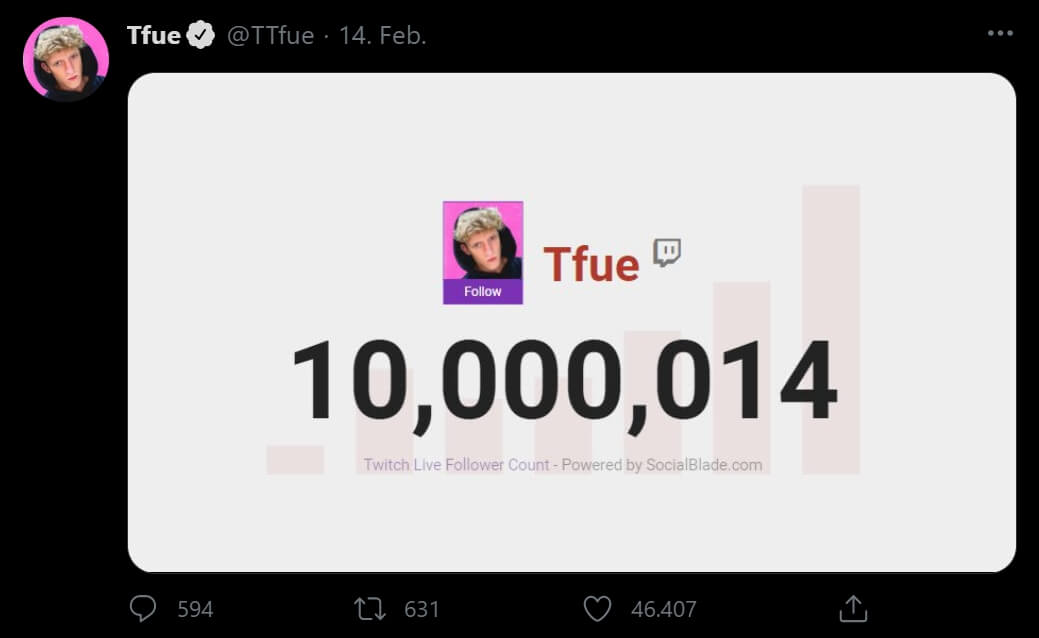 23-year-old Turner Tenney from Florida has been one of the most popular streamers for many years, but now he managed to generate 10 million followers during a live broadcast on Twitch. While Ninja is already well on his way towards 20 million, the competition for Tfue was relatively small. The only streamers who could even come close to threatening him in the hunt for 10 million were shroud or Rubius, but "closely followed" would probably be an exaggeration. In the livestream, he celebrated his success with two beers and quickly turned back to his game, Minecraft.

Hardly any Twitch streamer gets to the top without controversy or scandal, and Tenney had to find that out as well. In May 2019, friction arose between his former clan FaZe, because Tfue accused the responsible parties of having to squeeze 80% of the revenue through third parties to FaZe. In addition, the contract agreed upon and signed at the time was illegal. After 15 months of back and forth, Tfue and Faze reached an out-of-court settlement, although the lawsuit was still in full swing. Only the two parties know how the agreement was reached and what sums were paid behind the scenes.