The emote and term haHaa is used to express a nervous laugh in Twitch.

The emote haHaa is used when something strange is happening during a stream. It is used as a nervous laugh to react to what we are watching or is being said. We can also utilize it when we are feeling third-party embarrassment.

In this emote we see actor Andy Samberg's face, during a performance on Saturday Night Live, while he was playing the character Shy Ronnie.

This word is used as an alternative to "Cringe". In addition, we can also see it when we want to compare the streamer with a 10 year old kid.

To use and view the emote haHaa you must have the BetterTTV or FrankerFaceZ extensions installed in your browser.

The origin of the haHaa emote takes us to October 30, 2010. The emote shows us a picture of the actor Andy Samberg while he was playing the character Shy Ronnie, during a Saturday Night Live episode. 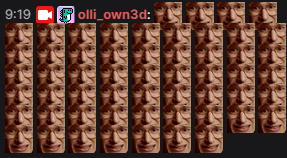 In that episode, "Shy Ronnie 2: Ronnie & Clyde" was shown, starring Andy Samberg and Rihanna. They both sang a song while perpetrating a funny bank robbery. The actor Jon Hamm, star of the series Mad Men, also participates in the clip.

The nervous smile of "Ronnie" can be seen at the beginning of this video, when the actor looks intensely at the camera.

"haHaa" is the name given to this emote due to the scream that Andy Samberg repeats non-stop during the video.

How is haHaa Pronounced?

As we watched in the video, haHaa pronunciation is as simple as screaming: “ha-haa”.

The haHaa emote is used when something strange is happening or to make a nervous laugh at an event. It can also be used to say that the streamer or someone in the chat has the mentality or is acting like a 10 year old.