The Kappa emote is used when you want to be sarcastic, ironic or whatever you are saying is a joke.

The Kappa emote is one of Twitch's best known and most used emotes. It is mainly used to indicate irony, sarcasm or a joke.

The person behind the Kappa emote is Josh DeSeno, an employee from Justin.tv. He appears in the emote without color, just in black and white and shows a slight smile.

The term Kappa is now included in everyday conversations among the youngest people. Its popularity has crossed over into the world of streaming.

The Kappa emote is a black and white photo of a former Justin.tv employee named Josh DeSeno. Justin.tv was the main streaming platform before Twitch. The place where the first streamers met.

For those who do not know, during those years Twitch was the video game branch of Justin.tv and it gained so much popularity that in 2014 it was separated and began to become the streaming platform that we have nowadays.

Josh DeSeno, worked during Justin.tv's early years and when they started adding emotes to the platform, Josh uploaded the iconic Kappa face. From the first moment, the emote became popular.

The name Kappa was chosen because DeSeno was a big fan of Japanese culture and, in Japan, Kappa is a creature that attracts people to lakes and takes them away.

Over time, different versions of the Kappa emote began to appear, such as: Kappapride, Kappaclaus, Kappaross and The Golden Kappa. 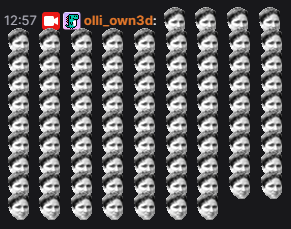 Variations of the Kappa Twitch Emote

The Golden Kappa: this emote is a Twitch easter egg. It appears randomly among users and fades away after a while. No one knows why it appears or how to make it reappear.

Kappapride: this emote was created to commemorate the homosexual marriage in the USA (Marriage Equality Act). It is currently the most used pride emote in Twitch.

Kappaclaus: In December 2015 Christmas brought us Kappa in his version as Santa.

Kappaross: When Twitch created the category of art and creativity, the celebration was double as they also paid tribute to the artist Bob Ross with this emote.

Keepo: If you have played Dota 2 you will know who Meepo is. Keepo merges Kappa with the well-known MOBA character Valve

Lukappi: We also use many emotes within the company. One emote stands out in particular, Lukappi. It was created from a photo of our CTO.

How is Kappa Pronounced?

The Kappa emote is used to express irony, sarcasm or to talk in jest. It is one of the most used and common emotes in any Twitch channel. Although the main Kappa emote is in black and white, there are other colorful variations. The face of the emote is that of a former employee of Justin.tv, the mother site of Twitch.tv.