Watch Parties have been known from Facebook for a long time, now Twitch is following with such a feature. But the streaming platform implements this differently than the social media giant and takes Watch Parties to a new level.

Since the beginning of September, you have the possibility to watch movies and series together with your viewers on your Twitch channel. All you need is an Amazon Prime membership. Learn in this article how Twitch Watch Parties work exactly, how you set them up and what else you need to consider.

Welcome to TV show and movie binges with your followers.

1 What are Twitch Watch Parties?

Whether you are a viewer or a streaming host, you need to have a prime subscription on Amazon. Twitch Watch Parties only work because the streaming service is also part of Amazon.

Below is a Watch Party similar to a regular stream that shows “Gameplay” or “Just Chatting”. In the upper right corner above the chat you will find the streamer in a small video window. Not only the webcam is shown, but also the overlay they have chosen.

By nature, the streamer's microphone is set to silent, so the sound of the series or movie is in the foreground. The viewer can of course set the commentary of the stream host to loud, so that both can be heard. However, from time to time technical errors occur, which we will explain in the FAQ below.

The TV show or the movie itself is shown in the large main video window, where the streamer is normally shown.

In summary, a Twitch Watch Party is a stream in which the streamer can watch a movie or an episode of a series with their audience - in real time.

However, viewers can only watch streams with series and films that are available in their respective region. The reason for this is the rights of use of the respective series and films, which are different at Amazon Prime. For example, there are films or series that are only available in the USA and those that are only available in Germany. In order not to violate these rights of use, there is also this regulation at Twitch Watch Parties. As a viewer you can only watch Watch Parties that stream a movie or series that you could watch on your Amazon Prime account.

For streamers, a Twitch Watch Party also means that they cannot run ads. Furthermore, it is not part of the Path to Partner Achievement and therefore does not bring you any progress in this respect. But it's a great change to the usual content and in our opinion it increases the bond between streamers and the community.

2 How to set up a Watch Party as a streamer

Now let's get down to business. We will explain how to stream your first Twitch Watch party.

First you have to go to your stream manager and add "Start Watch Party" to the "Quick Actions". To do this, go to the + and then click on the "add" button which is displayed under "Start Watch Party". Both of them will stand out visually, because Twitch will display it under "Recommended".

The first important point you have to consider before you start a party is that you have to be live already. It doesn't matter if you stream with OBS, Twitch Studio or any other broadcaster software. So, start your stream as usual, preferably with a specially created overlay or your just-chat overlay.

Then go to the stream manager in your Creator Dashboard and tap on the action "Start Watch Party" that you just added. This will open a list with all series and movies included in Prime. Bought or rented videos as well as Amazon channels are not selectable. 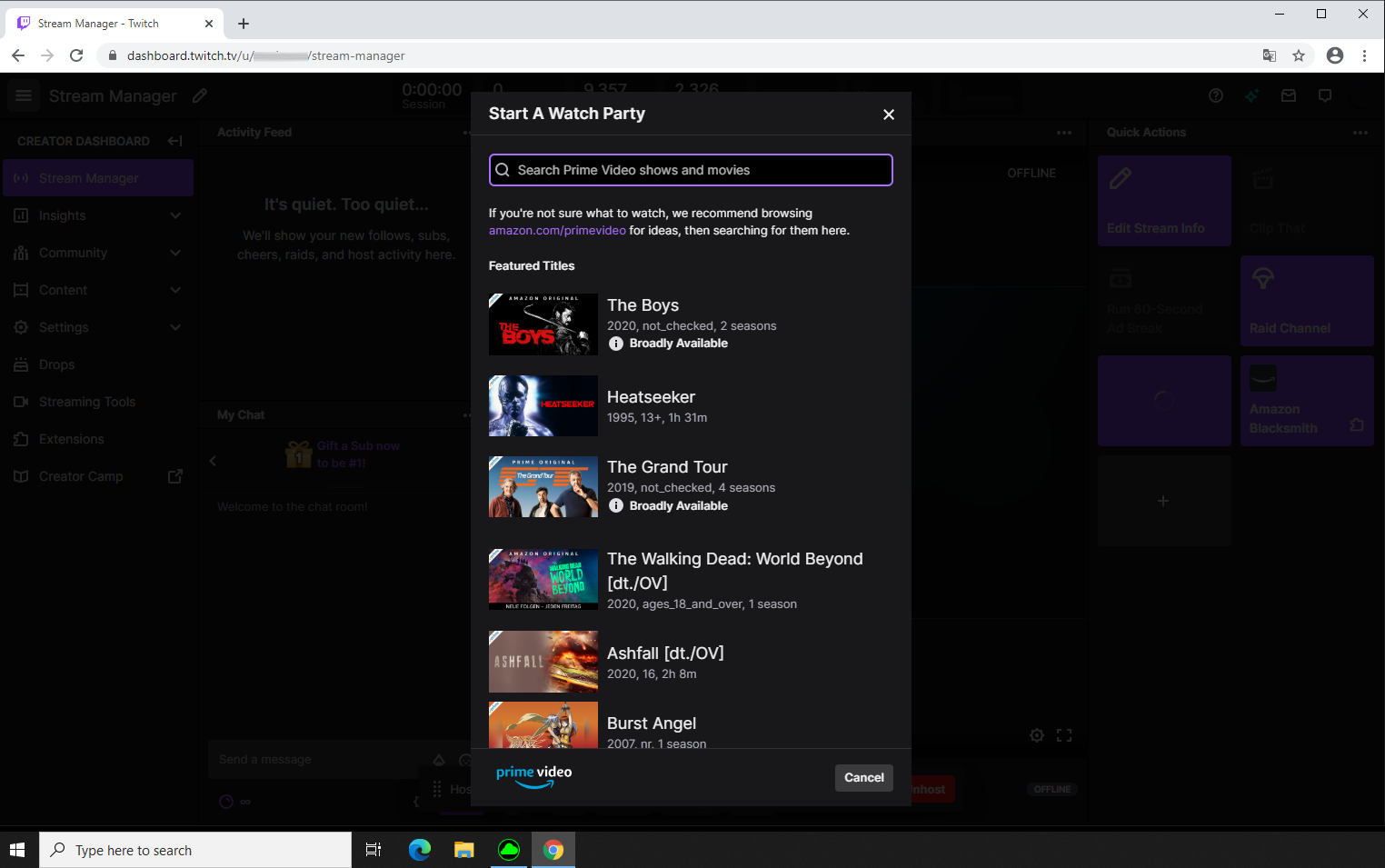 Choose from the list what you’d like to watch with your community. Before you select something for the first time, you will be asked to log in with your Amazon Prime account and link it to Twitch. Then you can start your Twitch Watch Party with the selected title.

If you want to watch the same view as your viewers, click the button "Open Watch Party in a new tab" below the main video window. 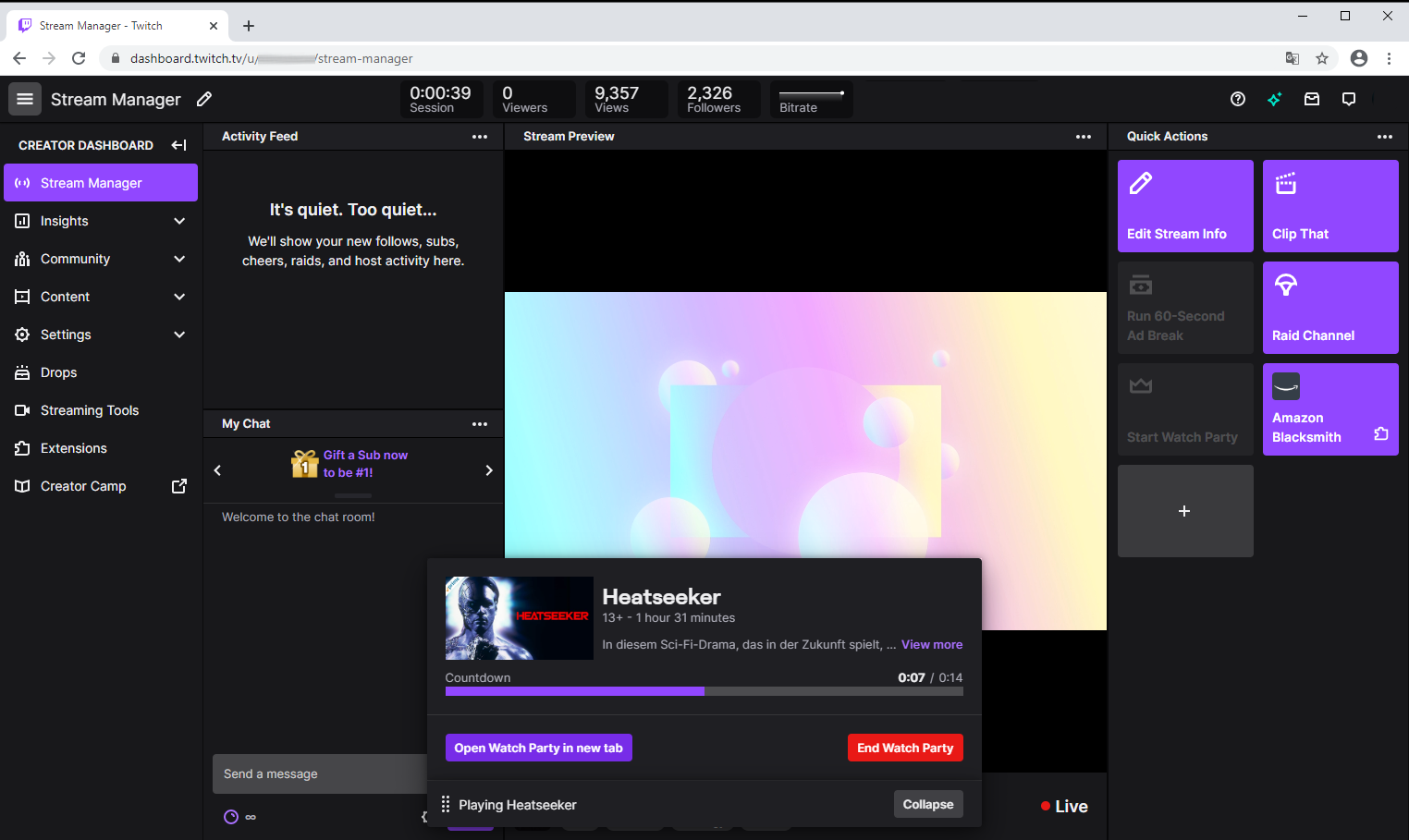 In the recommended channels or in the list of all streams within a category, your picture section will be shown as a thumbnail, as it can be seen on the right above the chat for all your viewers. Therefore, no excerpt from the running film or TV show is shown.

3 How to participate in Twitch Watch Parties as a viewer

Now it's the other side's turn, and we'll show you how you can join a Watch Party on Twitch as a viewer.

You can choose one of the live streams of your favorite streamers or have a look at the new category "Watch Party". Just like the streamers, you have to authorize your Amazon Prime Account for Twitch after selecting a Watch Party stream. Log in and link both. Appropriate input masks are displayed before you enter a Watch Party for the first time.

Afterwards a short countdown will lead you to the Watch Party, where you can already see the streamer in the upper right corner above the chat. If you want to listen to their comments, you have to manually switch the sound too loud. You can find this feature in the lower left corner of the small video clip showing the streamer's facecam.

Important note: Currently (October/2020) it is only possible to watch a Twitch Watch Party on desktop PCs and laptops. According to the streaming platform a mobile solution is in work and will be released within the next months.

You can't mute the stream of the movie or TV show, but you can pause it. But as soon as you press play again, it will continue where the stream is in real time.

Apart from that you can use the following functions as a viewer: The cinema mode (perfect for this category) and full screen as well as the adjustment of the video quality and subtitles. All functions can be found either above or below the main video window.

Of course, you can also support your streamer during a Watch Party on Twitch. Subscribing and cheering the channel remains a function in this format. All other typical chat gimmicks are also usable.

Of course, there are also rules to be followed by viewers and streamers. The following terms of use apply to Twitch Watch Parties:

Regarding age and youth protection, the guidelines of Prime Video must be observed. All series and films that have an age restriction, regardless of age, will show a corresponding notice to the viewers before they enter the Watch Party.

Everything else is regulated by the terms of use of Twitch. These can be viewed here: https://www.twitch.tv/p/de-de/legal/terms-of-service/

For example, the broadcaster software or other recording software may not record the stream. A Watch Party may therefore only refer to the stream. In this respect, the DMCA guidelines must also be observed. Violations against one of the guidelines will result in a ban from Twitch.

We answer the most frequently asked questions and give you tips on how to solve any problems that may occur.

Why do viewers hear the sound twice?

This problem occurs if your broadcaster software plays the sound source of your desktop to the stream as well. As a result, it will play both the actual audio track and the audio track from the Stream Manager's action.

The best thing to do is to mute all audio sources and activate only your microphone. You can still hear the sound of the movie or series if you click on "Open Watch Party in a new tab" below the stream window. This will give you the same view and audio track as your viewers.

Which streaming software is compatible for Watch Party?

Any existing current streaming software is suitable to start a Twitch Watch Party. No matter if it is Streamlabs OBS, OBS Studio, Twitch Studio or any other broadcaster software.

The reason for the simple answer is the following: The function to start and run a Watch Party is not done in the software, but online via Twitch's servers. Your streaming software is only responsible for the transmission, just like any other content you show on your Twitch channel.

Can I stop a running Watch Party?

Yes, you can. To do so, click on "Stop" in your Creator Dashboard. It is not possible to continue the Watch Party at a later time.

However, it is possible for viewers to continue watching at the interrupted point in their own Amazon Prime account. Prime remembers the timestamp on the streamer side as well as on the viewer side.

What do I need as a viewer to participate in Twitch Watch Parties?

First of all, the most important requirement is that you have a Prime subscription at Amazon. Without that you can't join a Watch Party, even if the streamer has such a prime account.

In addition, a desktop PC or laptop is required, because Twitch's app on smartphones and tablets don't support Watch Parties yet. According to Twitch, however, this will be supported in the next months.

Why don't my viewers hear me?

By default, the sound of your webcam or microphone is muted. Viewers can change this manually by clicking on the crossed-out speaker icon in the lower left corner of the window above the chat that shows your facecam.