The 4head emote is used to react to jokes or memes.

The 4head emote is used when we want to express laughter in response to a joke or idiotic comment done by the streamer.

It can also be used when we are seriously laughing a lot, like PepeLaugh, or some silly streamer comment has made us laugh a lot. And, in many occasions, it is used with sarcasm to express the complete opposite, as a comment or joke has not been funny.

It is mainly used on Twitch and we can see it in both video game channels and Just Chatting.

The emote is represented by the smiling face of the well-known League of Legends streamer, Cadburry.

It has nothing to do with the 5head emote which, in his case, means intelligence.

The exact date of 4Head's birth is unknown, but we do know that it became popular on Cadburry's Twitch channel back in 2015.

His community kept spamming the emote every time Cadburry made a joke or funny comment.

On the 29th of February 2016, the 4Head emote was introduced in the Urban Dictionary. Shortly afterwards, on September 11, 2016, the emote was added to the FrankerFacez extension and became even more popular on Twitch.

In 2018 a 4Head variant called 3Head appeared. 3Head is the same emote but Cadburry is missing a tooth and it is used when the joke or comment is a huge nonsense. 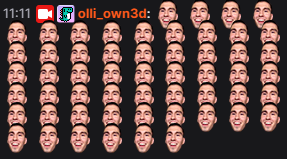 How is 4Head pronounced?

The pronunciation is relatively easy. It is the number 4 and the word head: “4-head”.

We use the 4Head emote as a response to a comment or joke made by the streamer. It can be used either if we are laughing a lot at the nonsense we have just heard, or in a sarcastic way because we have not found it funny.