In this article you will learn everything you ever wanted to know about the streamer "Papaplatte" - have fun!

Papaplatte (* January 24, 1997), real name Kevin Teller, is a German content creator. He streams regularly on Twitch and runs three active YouTube channels with different thematic focuses. His livestreams on Twitch, which take place several times a week, are longer than average at around 8-10 hours and are usually watched by around 25,000 viewers.

Twitch is considered the platform where most of Papaplatte's content takes place. His account exists since 2013, but he has only been streaming regularly since 2015. Kevin stands out above all with his unique way of entertaining, which makes him particularly popular with many viewers and other creators. He is considered to be an honest, direct and kind person who is not afraid of embarrassment and says what he thinks. During his streams, he is listed under the "Just Chatting" category most of the time, but video games are also regularly played with other streamers and friends. Some of the most played games include Escape from Tarkov, Minecraft, Valorant, Among Us, and Call of Duty: Warzone. There are also often IRL streams to watch or you can check out Kevin's cooking skills. 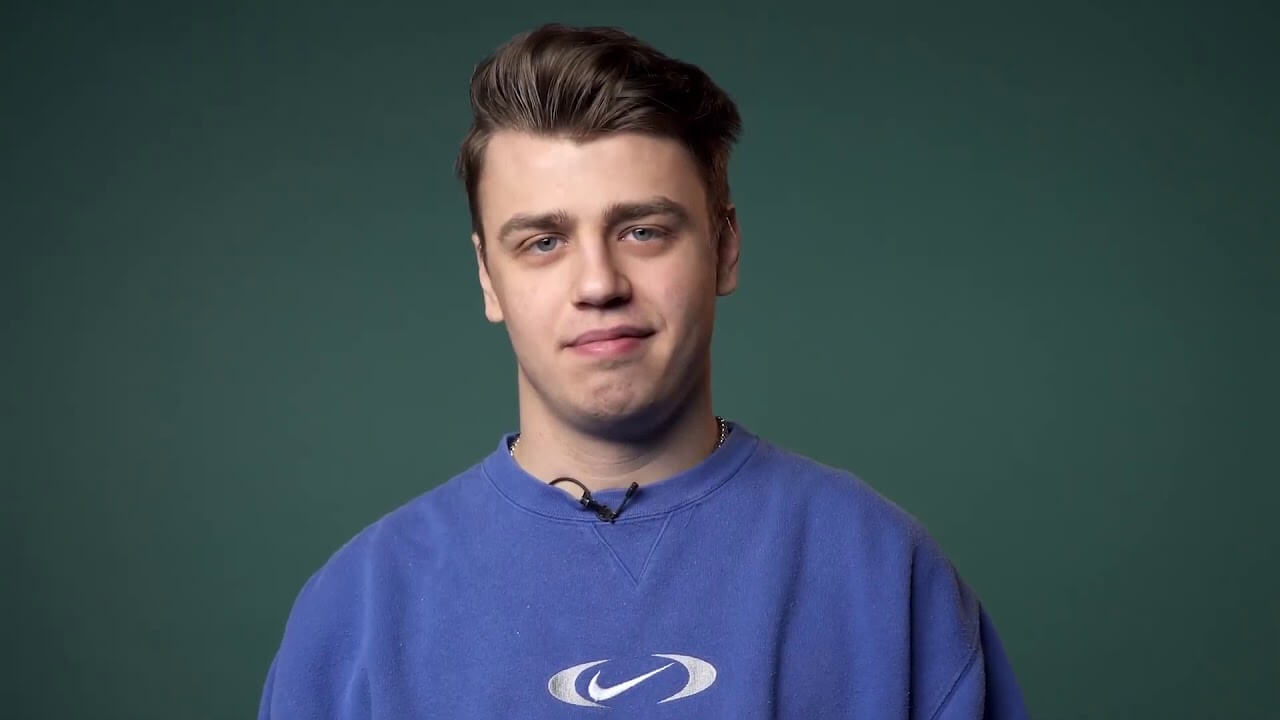 His three YouTube channels are extremely active and new videos are uploaded almost daily. On his main channel "Papaplatte", not only stream highlights are presented as usual, but mainly videos that were produced especially for this channel, which is not often seen with big creators these days. So here you can find some entertaining videos with different topics like FastFood tests, Q&As, vacation videos and much more. But of course, the highlights from his streams were also immortalized in edited form on "Papaplatte". These consist mostly of reactions, unboxings and digital shopping trips.

On his second channel, "Domo," you'll mainly find edited clips from Papaplatte's streams. The videos have an average playtime of 15 minutes and provide short and crisp entertainment for viewers. With 325,000 subscriptions, cleverly named video titles and concise thumbnails, the clips are exceptionally well clicked, which should make "Domo" a major source of income for the 23-year-old. Incidentally, the name "Domo" is inspired by his beloved ventilator, which bears the name "Domo."

In addition to "Domo" and "Papaplatte," Papaplatte also runs a gaming-only channel called "Papaplatte Gaming." There, stream recordings that revolve around the topic of gaming are immortalized. In addition to the classics like Call of Duty, Among Us & Co, Papaplatte also frequently presents games that no one has on their radar. For example, he picks out the "worst Firefight Simulator" on Steam and presents the game live in the stream. In general, however, Kevin tends to focus on video games with multiplayer features, so he can play together with other streamers, which always makes for funny moments. The videos on this channel have an average of 200,000 clicks and last about 15 minutes.

Kevin Teller was born and raised in Brandenburg, Germany. He attended elementary school at the age of 5 and from there went straight on to high school, where he graduated with a grade point average of 2.1. After graduating from high school, he began studying electrical engineering at the TU Berlin, but dropped out as his popularity as a creator grew. Since fifth grade, dancing has been an important part of his life, which eventually led to Kevin even participating in dance tournaments. Inspired by the YouTube hype that was prevalent in Germany at the time, he decided to start his own YouTube channel with his buddies. So with "SchnitzelTV" Papaplatte's first channel was launched and the path of a successful creator career was paved. The content of "SchnitzelTV" consisted mostly of comedy videos and challenges and the first video found its way online in 2012.

The first video on Papaplatte's current main channel is called "Papaplatte - Schwänze (Official Music Video)" and documents how the German raves about the male sexual organ in "sung" form. This breathtaking performance quickly started a hype on YouTube and became a click-guarantor. Thus, the video, which has already been clicked on over a million times, is actually considered the initial spark for the streamer's success, which continues to this day. In the meantime, Kevin has almost one million subscribers on YouTube, counting the subscriptions of all channels together, and enjoys great popularity with his extraordinary content. His videos and clips are repeatedly viewed and celebrated by other creators in various livestreams. 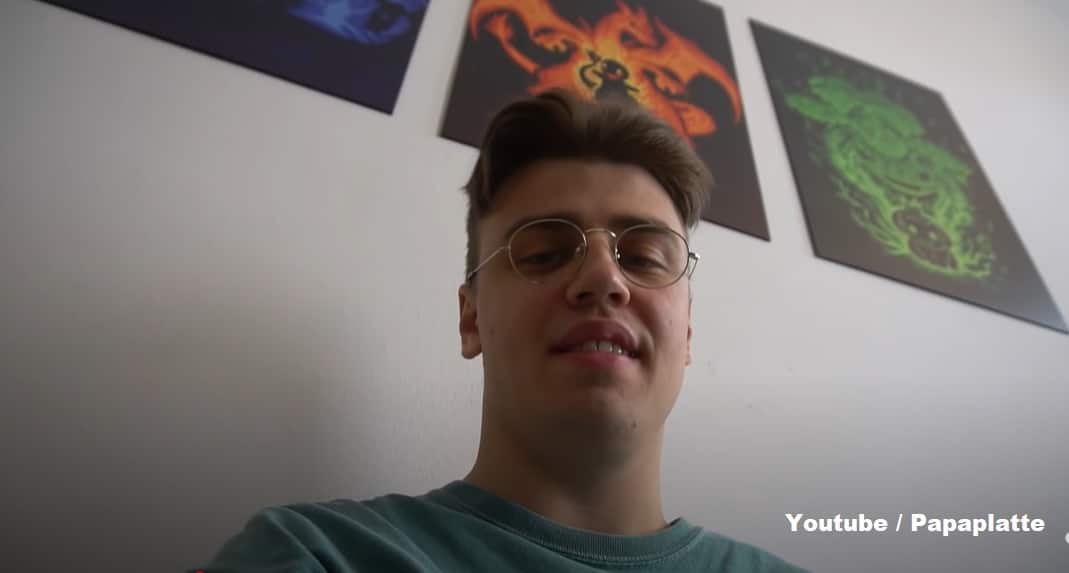 Papaplatte is also very active on the popular social media channels Instagram and Twitter. He likes to communicate with his fans there and announces his streams and other events. Kevin Teller is considered a meme made flesh in the scene, and the fact that he's not above doing anything and can laugh at himself seems to resonate with a lot of people. He is also known for his excessive use of Anglicisms during livestreams. So it often happens that the viewer hears nothing more than a confused mixture of English and German, without knowing what it is actually about.

As a great success of Papaplatte you can certainly count his growth in 2020. Thus, within a year, he managed to increase his average viewership from 7500 to almost 12,000. However, Papaplatte was able to make the biggest leap with new followers on Twitch, because the likeable Brandenburger probably only cracked the magic 1-million mark because he was able to gain no less than 516,000 followers in 2020. According to the Twitch statistics site sullygnome.com, Papaplatte is currently the 5th most-watched Twitch channel in Germany. With 23,224,062 watch hours, he even lands ahead of YouTube legends like PietSmiet or Gronkh. 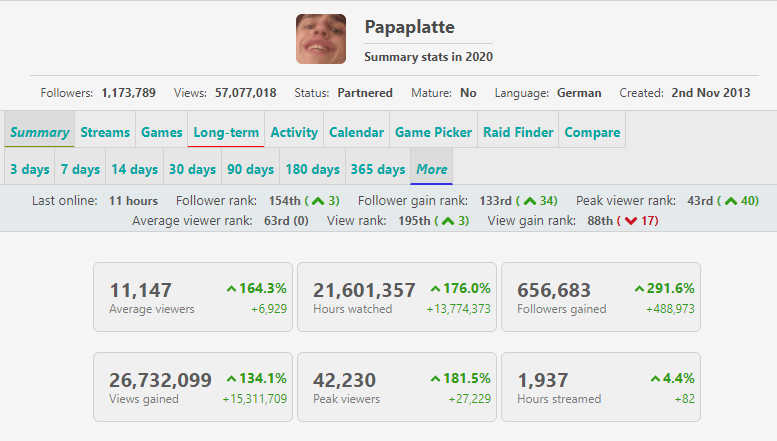 If you believe the figures from ingame.de, Papaplatte is currently in third place among the best earners on Twitch in Germany - right behind Knossi and MontanaBlack. In 2020, he probably had a total of 129,819 subs, which is extremely high by Twitch standards. Together with the advertising revenue on Twitch and the income from the subs, Papaplatte will probably have a total annual income of around 443,000 euros in 2020. However, this does not include the income from his YouTube channels. Due to his young age and the relatively short time of monetary success on Twitch & co, Kevin Teller probably has a total fortune of about 250,000 - 500,000.